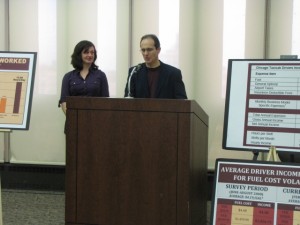 CHICAGO- A ground-breaking study called “Driven Into Poverty” conducted by University of Illinois Urbana-Champaign’s Center for Labor and Employment Relations (UIUC-CLER) and the American Friends Service Committee (AFSC) finds that Chicago cabdrivers are chronically overworked and underpaid close to the point of “economic failure.” Earning an average of only $4.38 an hour, few (6%) can afford to work an 8-hour day, while three-fourths of drivers spend 12 or more hours behind the wheel. 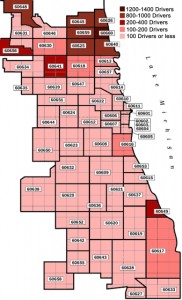 “Allowing so large a workforce to labor so near the margins of economic failure would seem to put at risk the infrastructure necessary to promoting Chicago as first-class international city,” says Dr. Robert Bruno, assistant director of UIUC’s Center for Labor and Employment Relations (CLER), who oversaw the landmark study “Driven Into Poverty”. “Despite working more than one full-time job (measured in hours worked) high operating expenses and a low fare rate results in a very modest net income from driving a cab,” says Dr. Bruno.

“If a factory owner in Chicago paid his workers $4.38/hour and kept them at work for 13 hrs. a day, it would called a sweatshop- The taxi industry in Chicago is a ‘sweatshop on wheels’,” says Michael McConnell, regional director of Quaker-based human rights group American Friends Service Committee (AFSC). AFSC commissioned the study and played a key role by conducting 927 in depth surveys (representing nearly 10% of Chicago cabdrivers) at random at O’Hare airport’s taxi staging area in the summer of 2008.

“Driven Into Poverty” is the first study of its kind conducted with Chicago cabdrivers, and on Thursday, March 26, UIUC-CLER presented the first part of a four part series to the media, city officials, and the public. The first portion of “Driven Into Poverty” deals with cabdriver income, while the three other parts deal with workplace violence, leasing issues and interactions with law enforcement.

“Over one hundred years ago, workers fought and died for the right to an 8-hour workday,” says Fayez Khozindar, chair of cabdriver group United Taxidrivers Community Council. “How much longer until we no longer have to drive 13-hours a day at below minimum wage?” 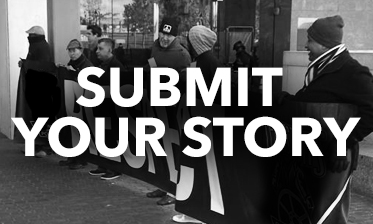